The small Japanese city of Nara is just as magical as it sounds. Nara is one of Japan’s most historically and culturally significant locations. It was Japan’s first permanent capital (from 710-784) and its ancient history remains well preserved throughout the city. Its abundance of ancient temples, neighborhoods of traditional arts, and beautiful gardens make it one of Japan’s top destinations for both tourists and locals. Oh, and you can’t forget its world-famous Deer Park. Nara is commonly referred to as the “City of Deer” because of its large population of somewhat tame deer that gather in Nara Park during the day. Nara is a must-do on your Japan itinerary. It’s located in the Kansai region and is just south of Kyoto and east of Osaka. Its closeness to these cities makes a day trip to Nara a popular way to see the city.

How to Get to Nara

Nara is 35 km (22 mi) south of Kyoto and about 28 km (17 mi) east of Osaka. Nara is often and easily done as a day trip from either of these cities, but if your itinerary allows for it, I recommend spending a night there. It doesn’t make much difference which city you travel from as they are both relatively close.

How to Get to Nara From Kyoto:

JR Line: Depart from JR Kyoto Station and arrive at JR Nara Station. The fastest train will be the Miyakoji Kaisoku Express. This express reaches Nara in about 45 minutes, whereas the local train takes about 70 minutes. The cost of an express ticket is 720 JPY.

Kintetsu Line: Depart from Kintetsu Kyoto Station and arrive at Kintetsu Nara Station. This station is slightly closer to Nara Park than the JR station is. Your best option is going t be the Tokkyu Direct Express. It takes about 35 minutes to reach Nara and costs 1130 JPY.

How to Get to Nara From Osaka:

The train is also the best way to get from Osaka to Nara and once again, you can choose from either the JR Line or the Kintetsu Line.

JR Line: Depart from JR Osaka Station and arrive at JR Nara Station. The best option is the Yamatoji Kaisoku Express which takes about 50 minutes and costs 800 JPY.

Kintetsu Line: Depart from Kintetsu Namba Station and arrive at Kintetsu Nara Station. There are multiple trains that run throughout the day, but try to get on on the express. The Kintetsu is once again the fastest of the two trains and takes about 40 minutes to reach Nara. The express train costs 1070 JPY.

How to Get to Nara From Kansai International Airport (KIX):

If you are arriving at Kansai International Airport in Osaka and wish to travel directly to Nara, then you have a couple of options. You can either take the train or a limousine bus. If you have purchased a JR Pass, I recommend taking the train to save yourself some money. Otherwise, the limo bus is easiest.

Limo Bus:
The limousine bus takes a little longer than the train but it’s more comfortable and makes travel with luggage easier. The bus takes about 80 minutes to reach Nara and can drop you off at either the JR or the Kintetsu station. The cost of a one-way ticket is 2,100 JPY and the bus schedule can be found here.

JR Line:
Depart from JR Haruka Airport Express, switch to JR Yamatoji Kaisoku Express at Tennoji Station, and arrive at JR Nara Station. Travel time on the train is around one hour, not including any wait time you might have at Tennoji. The cost is about 2300 JPY.

If you are coming from Tokyo, Hiroshima, or any other part of Japan, I recommend taking the Shinkansen (bullet train) to Kyoto and then taking one of the previously mentioned trains from there. 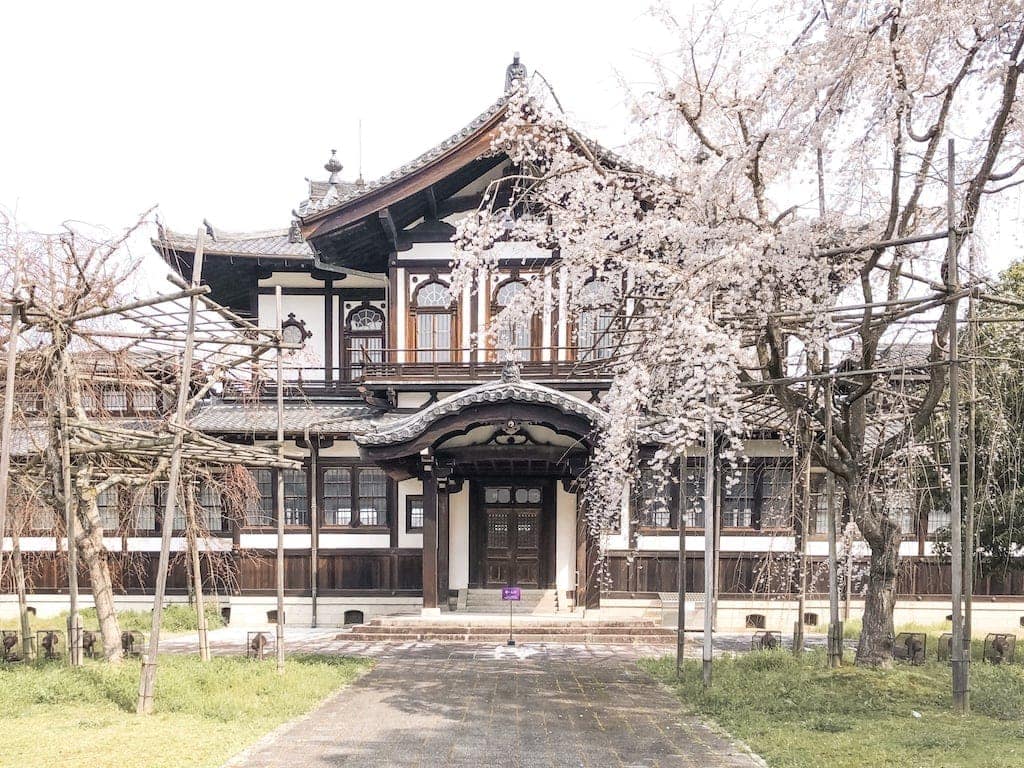 Top Things to Do on a Day Trip to Nara

Feed the Deer in Nara Park

Nara Park is an enormous park in the middle of the city and is home to Nara’s world-famous deer. It is the number one reason why most visitors plan a day trip to Nara. Over one-thousand wild deer roam freely throughout the park. The Japanese deer are considered sacred and up until 1637, killing one was a capital offense and punishable by death. The deer were later designated national treasures and are now protected within certain limits around the park.

The deer park is one of my favorite things to do on a day trip to Nara and I happily spent a large portion of my morning here. The deer are surprisingly tame and will allow you to approach them, pet them, and take their photo. Over the years, the deer have even been taught to bow for deer “crackers”. The crackers are sold throughout the park for 100 JPY and are animal-safe (made of flour and bran). The deer will politely lower their heads in exchange for the food. The deer are gentle for the most part but can become food-aggressive. Put all loose belongings away and don’t tease them. Be prepared; they may fight amongst themselves, gently head-butt you, or pull on your clothing.

Todaiji Temple is one of Japan’s most well-known temples. The grounds are expansive and cover a large part of northern Nara Park. The main hall, Daibutsuden Hall, was completed in 752 and is the world’s largest wooden building.  It also houses the world’s largest bronze Buddha, which is 15-meters tall. The temple hours change depending on the season. During the months of April to October, the hours are 7:30 am to 5:30 pm and from the months of November to March, the hours are 8:00 am to 5:00 pm. The temple can be extremely crowded, especially during high season. I suggest visiting on a weekday and arriving as soon as it opens. Admission is 600 JPY for the museum only and 1000 JPY for both the museum and Daibutsuden Hall. 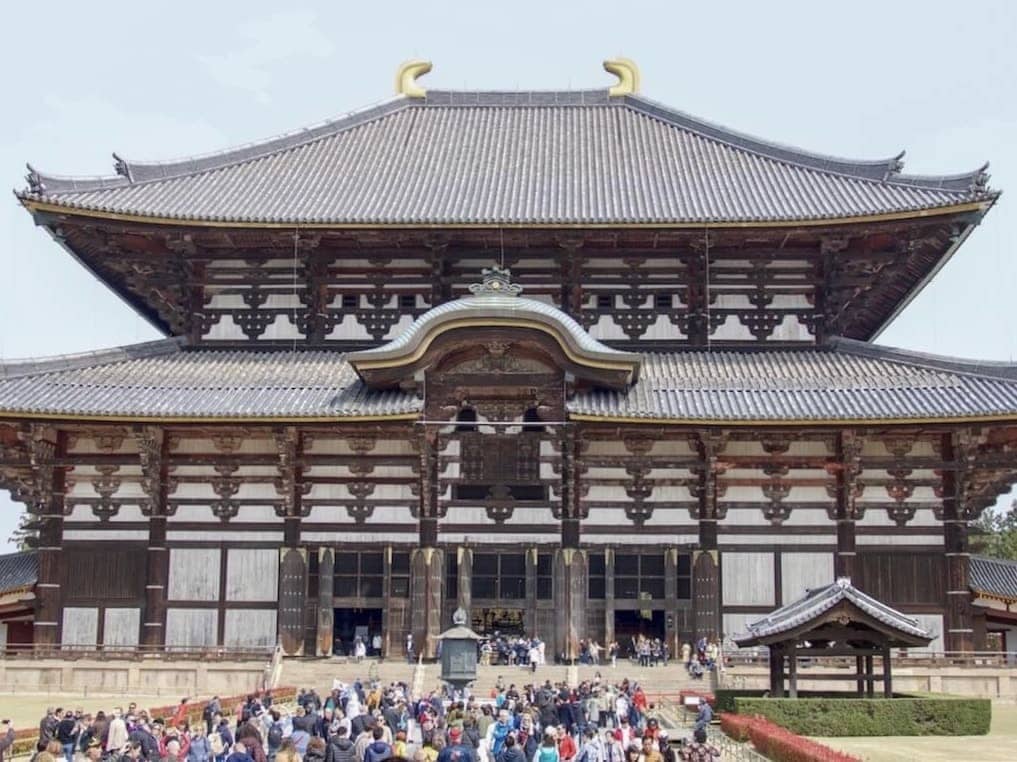 Kofukuji is located off the main road, near the city center. The entrance is rather modest and I just happened to stumble upon it while out exploring. The grounds are free to enter and are open to the public 24/7. However, Kofukuji National Treasure Hall & Eastern Golden Hall do have an admission fee and have official visiting hours. A ticket for both costs 900 JPY. I recommend visiting either in the early morning or dusk. 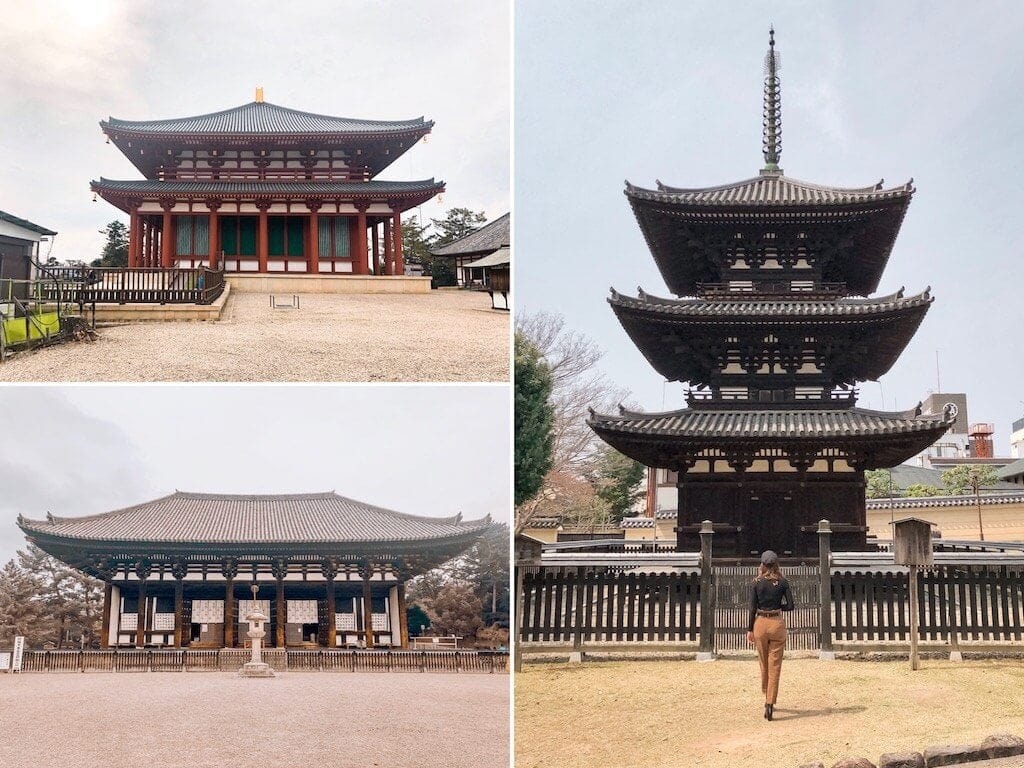 Isui-en Garden is just a short walk from Todaiji Temple. It’s a traditional Japanese garden and is the only “walking garden” in Nara. It was named Isui-en, which translates to “garden founded on water”, because of its two ponds that are fed by the Yoshikigawa River. The garden is divided into two sections: a front garden and a back garden. The front garden dates back to the 17th century and the back garden to 1899. There are a couple of traditional tea houses on the property, as well as a museum, which contains pottery and other artworks. The gardens are picture perfect and immaculately maintained. The peaceful Isui-en Garden makes a great break from the surrounding busy tourist attractions. It’s closed on Tuesdays and a few weeks throughout the year for maintenance. The entrance fee is 1200 JPY. 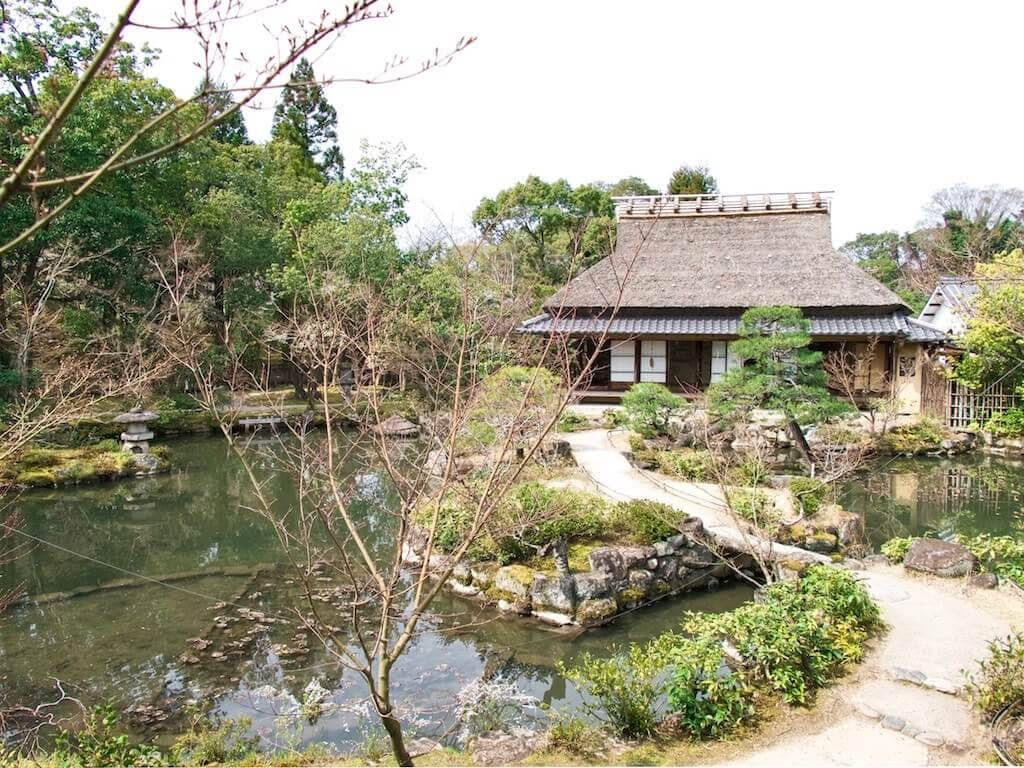 Kasuga-Taisha Shrine is Nara’s most well-known shrine. It was built in 768 and honors four different gods. Most shrines are usually only dedicated to one or two. Kasuga-Taisha is famous for its lanterns that have been donated by worshipers. Hundreds of the bronze lanterns can be seen hanging throughout the vibrantly painted orange shrine. The path leading to the shrine is very pretty and you’ll come across lots of deer along your walk. It’s free to explore the surrounding grounds but the inner part of the shrine, the museum, and the garden require their own admission ticket. Each ticket costs 500 JPY. Hours vary so please check before visiting. 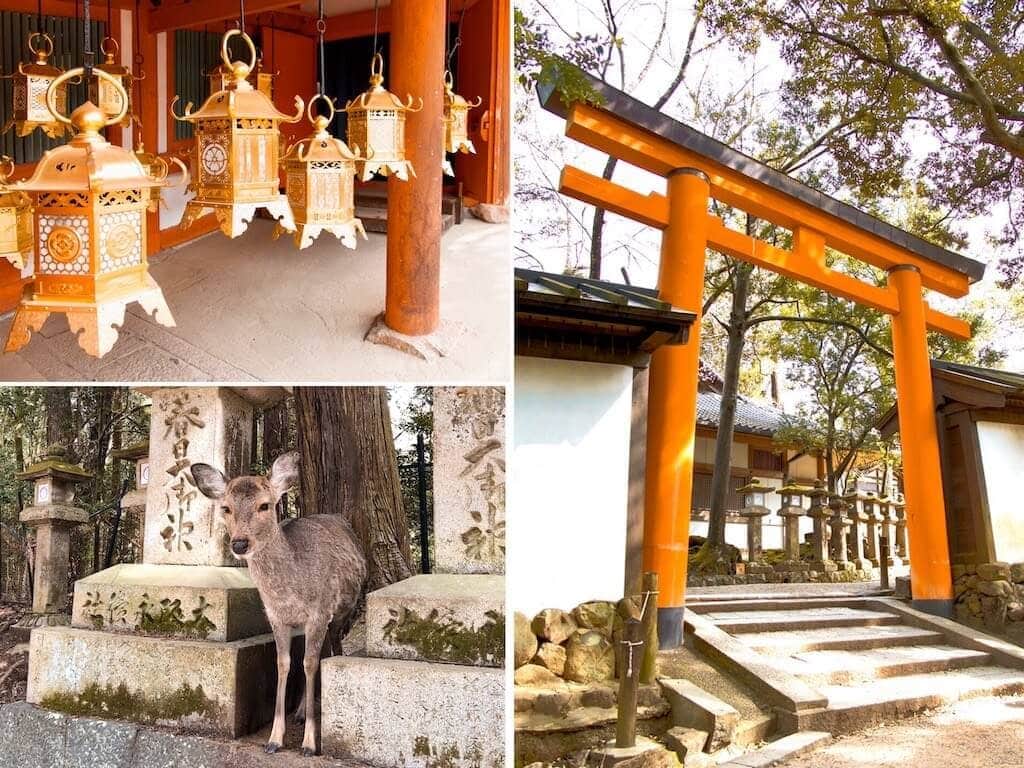 Naramachi, meaning “Nara Town”, is an area of narrow streets made up of traditional buildings. It’s located just south of Kofukuji Temple and once housed Nara’s merchants during the Edo Period (1603-1868). It’s now home to a few small museums, shops, cafes, and restaurants. The outside of the buildings have been perfectly preserved and a walk through the streets of Naramachi is like taking a walk back in time. The tiled roofs and latticed windows are beautiful. 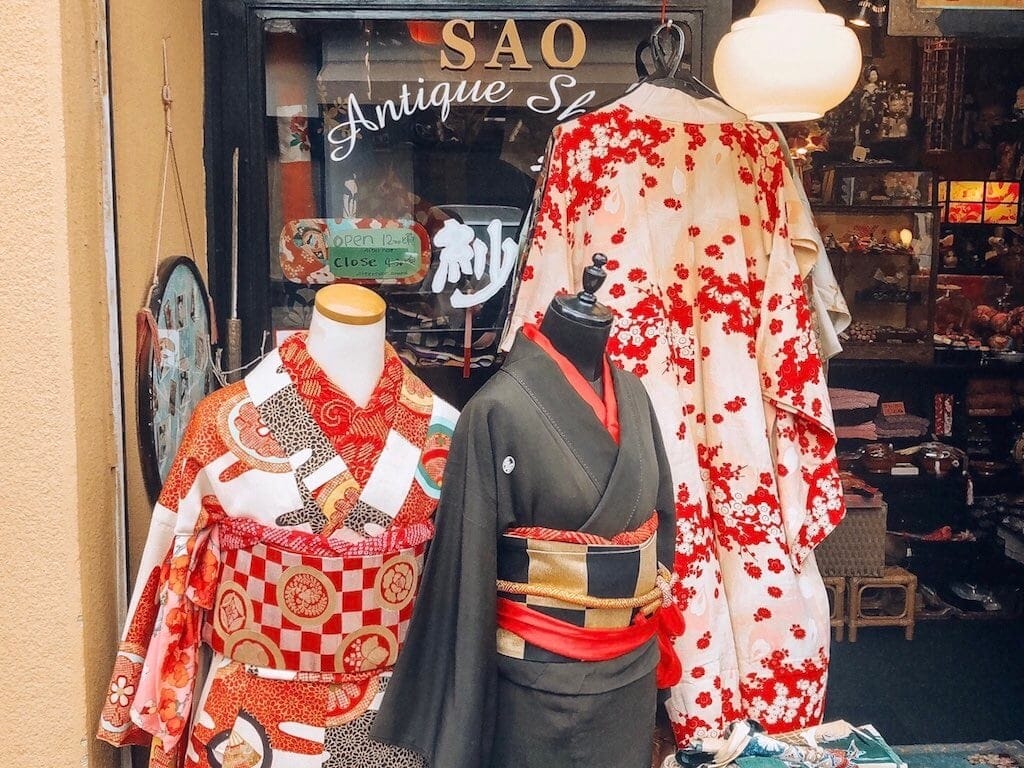 Where to Stay in Nara

Nara Hotel
Nara Hotel is not the modern-day luxury hotel that one would expect based upon its pricey room rate, but if you appreciate history and architecture then it’s a wonderful place to stay. It opened in 1909 and is one of the most historic hotels in Japan. It has a long list of famous guests that include: Japanese emperors, generals, princes from various countries, U.S. presidents, popes, and even the Dalai Lama and Albert Einstein. The rooms are elegantly decorated with antique furniture and the grounds are beautifully kept. It’s somewhat isolated but many of Nara’s sights are still within walking distance.

Noborioji Hotel Nara
Noborioji Hotel Nara is a luxury boutique hotel with just 14 rooms. The hotel is located next to Kofukuji Temple and is walking distance to Nara Park, Todaiji Temple, and many of the city’s top sights. It’s a great choice if you are looking to relax. The hotel is adults only and is located on a quiet street. There is a French restaurant and a bar on-site as well.

Deer Park Inn
The Deer Park Inn is a great budget option. Who wouldn’t want to wake up to deer right outside your door? Its location is superb. The hostel-type guesthouse is actually located within the Deer Park and Kofukuji Temple is located nearby. The guesthouse has a communal kitchen available for guests to prepare their own meals and shared bathrooms.

Have you visited Nara? Is there something I missed? If you’ve enjoyed this post, please leave a comment or share using the social media buttons below. Looking for more fun animal encounters in Japan? Continue to my post, “Rabbit Island, Japan: A Guide to Visiting Okunoshima” and discover Japan’s cutest island.

Travel Worth Telling is a place to share travel stories and adventures, as well as a place to come for tips, itineraries and suggestions.

Booking.com
The tubs at Mystic Hot Springs were the perfect wa

What are some of your favorite hikes? The hike to

Has anyone visited the Stanley Hotel? I would love

Which photo is your favorite? 1 or 2? I couldn’t

How is everyone doing? Many things have closed her

Last weekend I partnered with @palm_mountain for a

This is the last of my Mexico series. I can’t be