Reykjavik is the capital of Iceland and is a small but colorful city. It has quirky cafes, an interesting art scene, and great shopping streets. It’s also the hub for international travel in Iceland. With Icelandair and other airlines offering affordable airfare to Reykjavik these days, travel to Iceland has never been so appealing.

Reykjavik is fantastic but in order to really experience Iceland, one needs to get outside of the city. Luckily, Reykjavik is a great base for exploring Iceland’s stunning scenery. There are many tours that depart from the city but I recommend renting a car and traveling independently. Iceland’s roads are fairly easy to navigate (with the exception of winter) and many of the country’s highlights are just a few hours from the city. The following are six easy day trips from Reykjavik, Iceland: 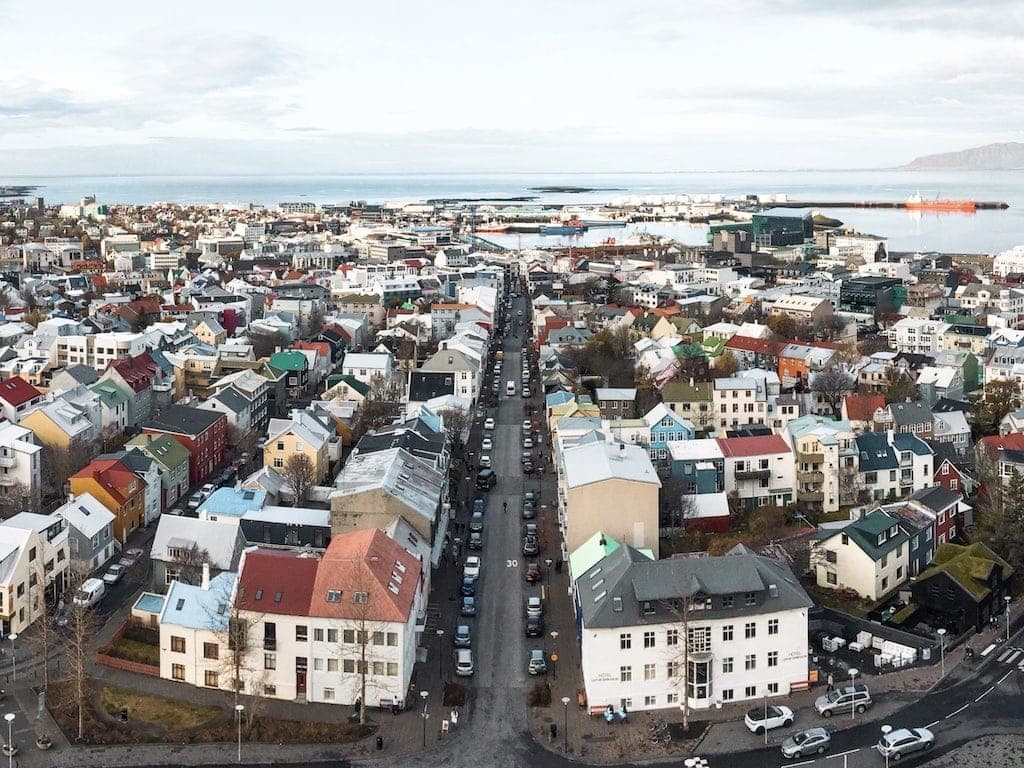 No trip to Iceland is complete without a visit to the Golden Circle. It’s easily accessible from Reykjavik and should not be missed. The Golden Circle is a 300 km (190 mi) route that goes into the southern uplands and loops back around to Reykjavik. Many of Iceland’s major sights are located along the drive, making it the most toured area of Iceland. Must-visit stops include:

The Geysir Geothermal Area has been active for over 1,000 years and many bubbling hot springs and mud pits can be found here. It’s also home to two very famous geysers. The geysers are named Geysir and Strokkur. Geysir is the first hot spring ever written about and has since given the name to hot springs everywhere. Although it is mostly dormant now, it is said to have reached heights of 170 m (560 ft). Strokkur is Iceland’s most active geyser and erupts about every five to ten minutes. Water from Strokkur can erupt to heights reaching 40 m (130 ft). The area also has a visitor center, cafe, and shopping. 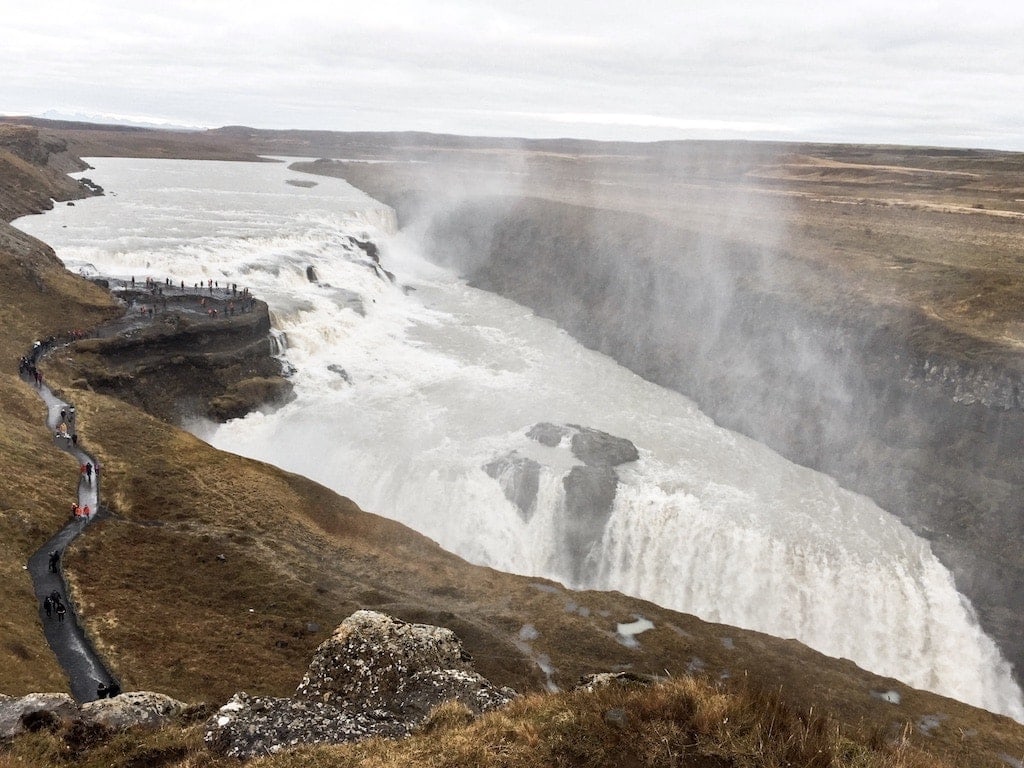 Gullfoss is located just 10 minutes from the Geysir Geothermal Area. It’s one of the largest and most impressive waterfalls in Iceland. It’s a favorite among both tourists and Icelanders. Its strong waters regularly flow from the Hvítá river and are even more abundant during the summer when there is melt-off from Iceland’s largest glacier, Langjökull. Gullfoss is made up of two separate drops totaling 32 m (104 feet) and its waters are so powerful that you can actually feel and hear them roar.

Kerid Crater Lake is located about 50 minutes southwest of Gullfoss. It is a 3,000-year-old volcanic crater lake and is a popular stop on the Golden Circle. It’s famous for its vivid colors and intact caldera. The lake’s surrounding volcanic rock is bright red and the soil’s rich mineral content produces eye-popping blue waters. There is a trail that goes around the rim of the crater or a ladder can be taken down to the lake. The entrance fee is 400 ISK. 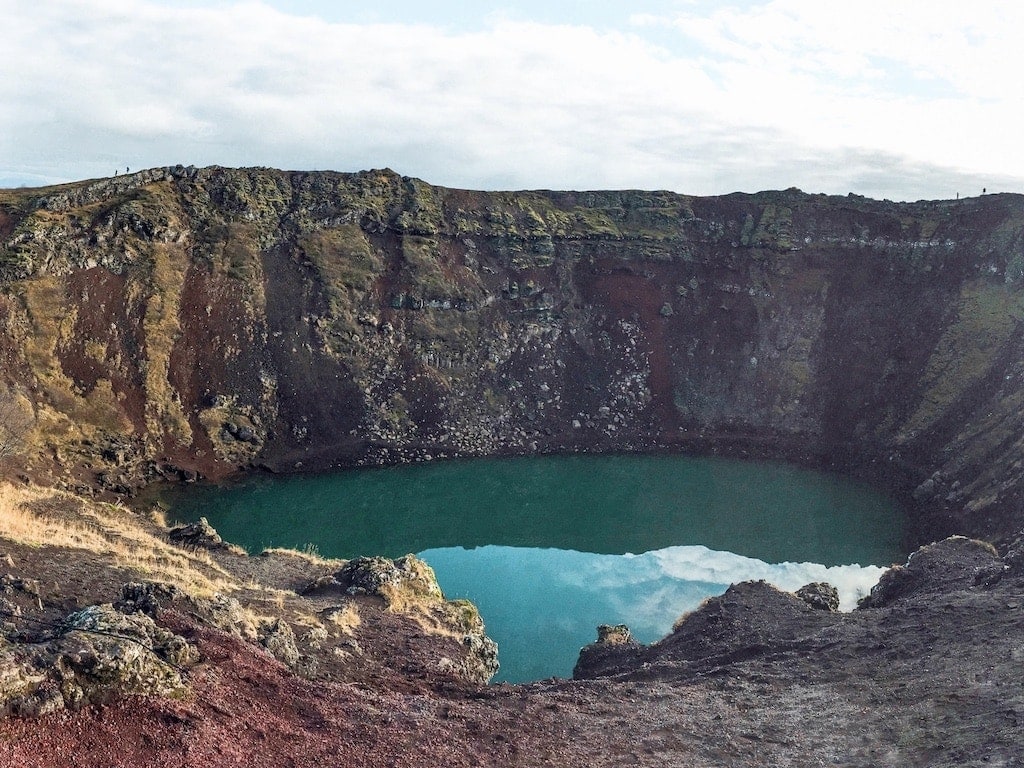 Thingvellir National Park is the first of Iceland’s three national parks and is the country’s only UNESCO World Heritage Site. It is technically the first stop on the Golden the Circle route but I have chosen to separate it as I feel it needs a whole day of its own. The park’s geology is amazing. It’s situated directly between two tectonic plates.

On one side you can see the North American continent and on the other side, the Eurasian. There are plenty of things to do in Thingvellir National Park. There are waterfalls to explore, beautiful hikes, fishing, and my personal favorite, Silfra. Silfra is a rift within Thingvellir Lake where one can snorkel/dive between the North American and Eurasian plates. It is the only place in the world where this is possible, making it an incredible bucket list experience.

It will likely be the clearest and bluest water you ever have the chance to swim in. It’s also very cold with temperatures maintaining a fairly constant 2°C (36 °F). A drysuit is used to protect the body from the icy waters and you will need to be accompanied by a guide.

The Blue Lagoon is a geothermal spa located on Iceland’s Reykjanes Peninsula. It has been included on Condé Nast Traveller’s list of the top 10 spas in the world and is Iceland’s most visited attraction. It’s open year-round and the water maintains a temperature of about 39°C (102°F), making it perfect for soaking. The man-made lagoon is rich in silica and sulfur which are known for their amazing effects on the skin. Be sure to try the silica mud mask.

The Blue Lagoon is a 30-minute drive from Reykjavik and just 15 minutes from Keflavik International Airport. It makes a great first or last stop on your trip. Pre-booking is required and there is an option of a comfort or premium package. I would choose the premium package only if you wish to dine at the onsite restaurant, Lava. This package includes a reservation and a glass of wine. Otherwise, I would stick with the comfort option. There is also a full spa on-site with services offered at an additional charge. For more information, visit the Blue Lagoon website. Entry starts at 6990 ISK.

Secret Lagoon is a great alternative if the Blue Lagoon is not in your budget. Although it’s not exactly a secret, the lagoon does not get the same attention the Blue Lagoon does. It’s smaller in size but I found it to be much more relaxing. Secret Lagoon is located near the small village of Fludir and is situated next to a geothermal area. It’s a little more than an hour from Reykjavik and just off the Golden Circle route.

The pool was built in 1981, making it one of Iceland’s oldest swimming pools. It was re-opened to the public in 2005 and has since gone under renovations. It now has a nice shower area and a sm