One of Thailand’s major draws is its elephants. Interacting with elephants is one of the country’s most sought out activities, yet many people are completely unaware as to how the elephants in Thailand’s tourism industry are treated. While in Thailand, I wanted to spend some time with elephants but I also wanted to make sure my money was going to an organization where the animals are treated with kindness and respect.

What is Elephant Nature Park?

Elephant Nature Park is a rescue and rehabilitation center in northern Thailand. It’s located just outside of the city of Chiang Mai, in the beautiful countryside. The park was founded in the 1990s as a sanctuary for elephants. Today, the primary focus is still elephants, but ENP also has dogs, cats, water buffalo, and other rescued animals.

Over the last century, Thailand’s elephant population has greatly dwindled. There are only 3,000- 4,000 elephants left in the country and about half of those live in captivity. Many of these captive elephants suffer great abuse and live in deplorable conditions. Elephant Nature Park saves as many of these animals as possible and gives them a home where they can thrive. There are about 70 elephants on the 250-acre property.

The park provides a natural environment and caring staff for the rescued elephants and serves as a place for them to safely live out the rest of their days.  The park also has conservation and education programs in place. They work to reforest the surrounding areas by planting trees and educate locals in hopes of changing attitudes towards these incredible animals. It’s a wonderful organization and welcomes visitors through a variety of programs, including extended volunteer work.

Where do the elephants come from?

Elephant Nature Park rescues elephants for a variety of reasons. Two of these reasons being tourism and logging. Many of the elephants at the park were domesticated early on in their lives so that they could be made to perform in circuses, beg on the streets, and give people rides. The process of domesticating an elephant is also referred to as “crushing.”

It is called this because it literally crushes the elephant’s spirit. A baby elephant is usually taken from the wild after its mother and the other adults around it are killed. It is then put in a large stall or cage and is bound in a way where it can not move its head or limbs. The young elephant is then beaten with sticks or chains, stabbed through the ears and feet with nails, and deprived of sleep, food, and water. This cruelty takes place for an extended period of time and only ends once the elephant becomes so depressed it gives up and becomes submissive.

Many of these elephants are captured and domesticated in Myanmar and then trafficked into Thailand. Many elephants are put to work in the logging industry, where chains are harnessed to their bodies, and they are used to transport heavy teak wood through the hillsides and waters. Logging was banned in Thailand in 1989, but illegal logging still exists within the country and is still legal in surrounding countries. After the ban, many of these elephants entered the tourism industry.

The cruelty is endless and continues after the “crushing” process as well. An elephant is not built for many of the tasks that are forced upon them. The tricks they perform at circuses are often extremely painful, resulting in deformed and sometimes broken limbs. Elephants that are used for rides are worked continuously throughout the day, often without food or water, and spend their nights in chains. Their backs are not meant for riders and can not carry the weight (often two riders and a saddle). The saddle alone weighs at least 100 pounds.

They experience cruel beatings daily and often die from exhaustion. The elephants are forced into these tasks until they are too old or become injured. This is where Elephant Nature Park steps in and negotiates their release. In addition to these domesticated elephants, ENP also rescues and rehabilitates elephants who have become injured in the wild. It is actually not uncommon for them to step on landmines in the war-torn country of neighboring Cambodia. 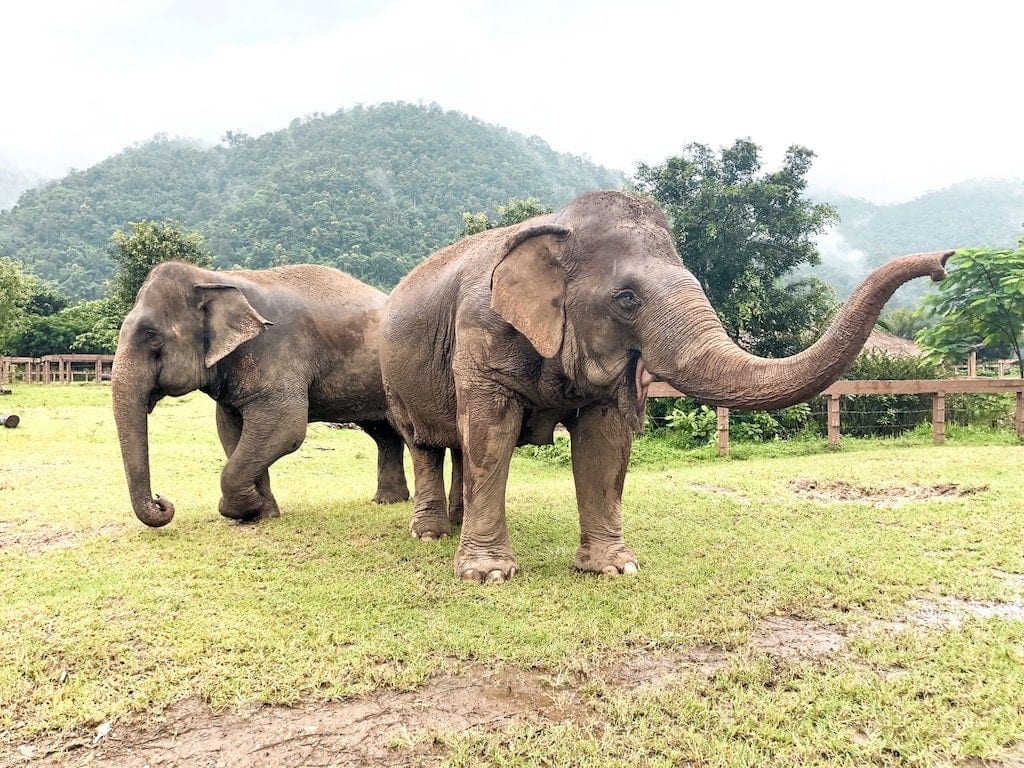 Are all of Thailand’s elephant sanctuaries ethical?

No. Many of Thailand’s tourists are no longer naive to the abuse and have chosen to boycott elephant tourism with their dollars. Many of these cruel places have become savvy to this and have begun referring to themselves as sanctuaries in order to mislead the public. Elephants at a true sanctuary are never forced into an activity they don’t want to do and will not be ridden under any circumstance. If elephant rides are offered then it is definitely not a sanctuary.

The same goes for chains. Many places chain their elephants when out of the public eye. If an elephant is chained for any period of time, then it is not a sanctuary. Please do thorough research before visiting any place that calls itself a sanctuary, orphanage, rescue, etc. It may appear ethical on the surface, but after a little digging, you may come to find quite the opposite. Elephant Nature Park is the only ethical sanctuary in Thailand that I am aware of and feel confident recommending.

How to Visit Elephant Nature Park

Elephant Nature Park hosts visitors daily in hopes of educating the public, raising awareness, and eventually putting a stop to the violence many elephants endure. Funds collected from visitors go to the high-cost care of the animals. The park offers the public a few different ways to visit. If you would like to spend just a day or two at the park, your best bet is to go as a visitor. You have the option of a half or full-day visit or even an overnight stay.

If you would like to spend an extended amount of time at Elephant Nature Park, then you can choose to volunteer. Volunteers can stay at the park for up to two weeks. Volunteers will not only have a chance to more closely interact with the elephants, but they’ll also be assisting in the care of the other animals. All visits and volunteer work should be booked directly through Elephant Nature Park in advance. I suggest doing this as early as possible because spots do fill quickly. If you find yourself in Thailand without a reservation, call for availability. There are often cancellations. 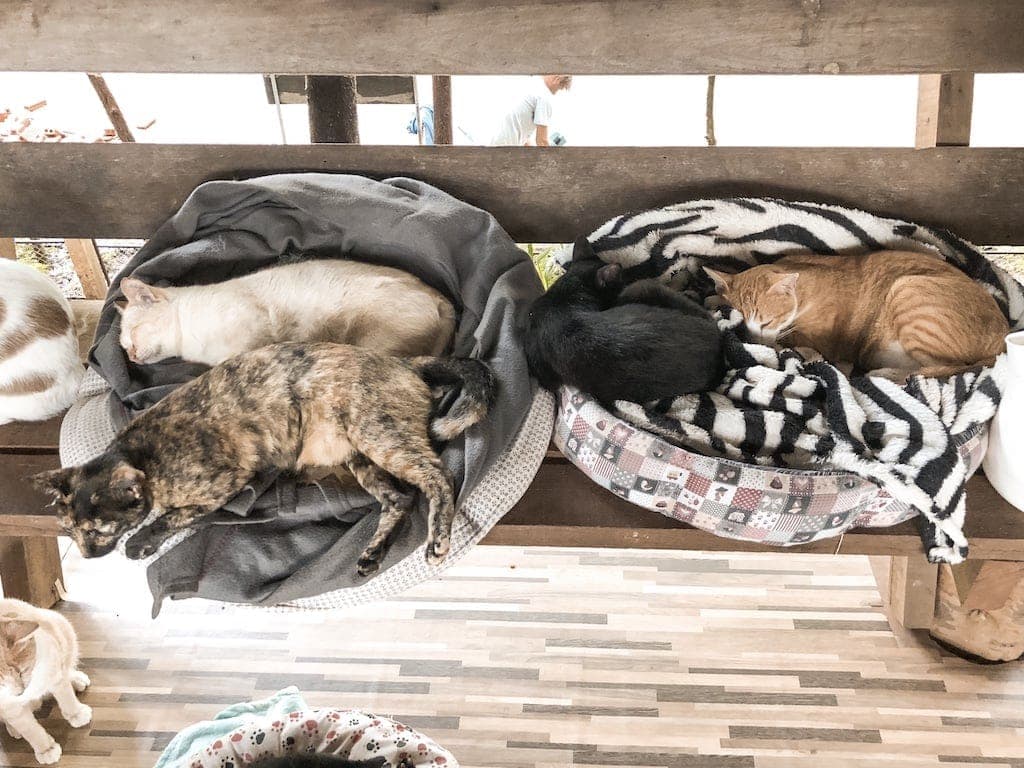 I had an amazing time at Elephant Nature Park. I chose to do a short or half-day park visit. On the morning of my tour, a shuttle picked me up from my hotel in Old City, Chiang Mai (transportation is included if staying within Old City walls) and we drove for about an hour and a half through the most beautiful, green countryside. Upon arrival at the park, our group fed the elephants a snack of bananas and watermelon.

We spent the rest of the morning taking photos and interacting with one of the older elephants. A vegetarian lunch was then served and we were allowed some free time, which I spent visiting the cat center. After lunch, we toured the grounds and got to see two baby elephants playing in the river as their mother watched over them. We continued to walk around the park while learning about the elephants and observing their behavior before returning to the shuttle in the late afternoon.