How to Prepare and Pack for a Safari

Preparing and packing for a safari can be a somewhat daunting task. If this is your first safari, it’s nearly impossible to know exactly what to bring and it’s quite easy to become overwhelmed. Leading up to my departure, I spent days researching but found information hard to come by or very scattered. I compiled the following based on my research and personal experience in hopes that it will help make preparing and packing for safari less of a struggle, alleviate some of the stress involved, and make the planning stages more enjoyable. Getting ready for a safari should be exciting.

Pre-departure, it is a good idea to make sure you are up to date on all your basic vaccines, such as Measles, Mumps, Rubella, Hepatitis A and B, and Tetanus. There are also a handful of vaccines that are recommended and possibly required, depending on where you are traveling to and from. These are Yellow Fever, Typhoid, and Meningitis. Yellow Fever is a mosquito-borne disease and the vaccine is recommended when traveling to Tanzania and other African countries.

It may be even be required if you are traveling from Kenya or any country that is at high risk for the disease. I opted for the vaccine, seeing that mosquitos usually love me. I actually didn’t find them to be a problem in either Kenya or Tanzania though, but it was quite dry when I went. I didn’t really encounter them until I reached the more humid countries of Zimbabwe and Zambia.

Typhoid and Meningitis vaccines are others you may opt for, if traveling to rural or high-risk areas. It is best to consult with a travel doctor a few months before your departure, so you can make an informed decision as to what vaccines to move forward with and have the appropriate amount on time to get them administered.

Malaria is another mosquito-borne illness to be aware of. It can be prevalent in many parts of Africa and you should start taking an anti-malarial, prescribed by your doctor, pre-departure. I would also recommend bringing an anti-nausea medication. I, personally, didn’t do well with Malarone and had periods of nauseousness lasting for a few hours each day. I wish I had brought something to alleviate the side effects.

What to Wear on Safari

I’m not going to lie. I got a little into outfit planning for this trip. I mean, how often do you get to go on safari? I decided to have some fun with it and embrace all the traditional safari colors. In actuality, though, there are no specific dress requirements (unless you are doing a walking safari) and you could probably find a sufficient amount of clothing in your existing wardrobe when packing for safari.

Since you are spending most of your safari inside a vehicle, what you wear really isn’t that important. I do, however, have a few suggestions. It’s not really the animals you want to consider when packing for safari, it’s the dirt. It can be extremely dusty, especially during the dry season, and this is the main reason for wearing neutrals. They don’t show the dirt. Shades of brown, green, and khaki are ideal. I brought a handful of white shirts, which ended up beyond the help of bleach and had to be thrown away upon returning home.

You likely won’t be doing a lot of walking, but I still think it’s important to have comfortable shoes. I brought a pair of tennis shoes, sandals and ankle boots. I ended up wearing the boots the most since they kept the dirt away from my feet. There are two colors that you should try to avoid. They are blue and black. The reason is that they attract a large biting fly, the Tsetse fly.

Denim should be avoided altogether, not only because it’s blue, but because of its lack of ability to dry quickly. Many lodges have a laundry service, but they don’t have dryers. I was on the move during my safari and never stayed in one place for more than a night. I would arrive at each lodge late in the day and I always missed the cut-off for laundry. I found myself washing my tops and small items in the room’s bathroom sink.

I mostly wore lightweight pants and T-shirts. They were easy to wash and didn’t take up too much room in my suitcase. I would suggest bringing a couple more pairs of pants than what you think you will need due to the dirt factor. I would also bring items that can be layered. I went on safari near the end of February and saw highs of around 85 degrees Fahrenheit during the day. Morning and evenings can get somewhat chilly though.

It was nice to have a lightweight jacket or sweater during these times. If you think you might be sensitive to the dust, a bandana or scarf to cover your nose and mouth is a good idea. You will also want an additional pair of fresh clothes each day, so you have something clean to change into before dinner at the lodge. Keep in mind that there may be weight limits and luggage restrictions if you will be flying on a smaller plane. 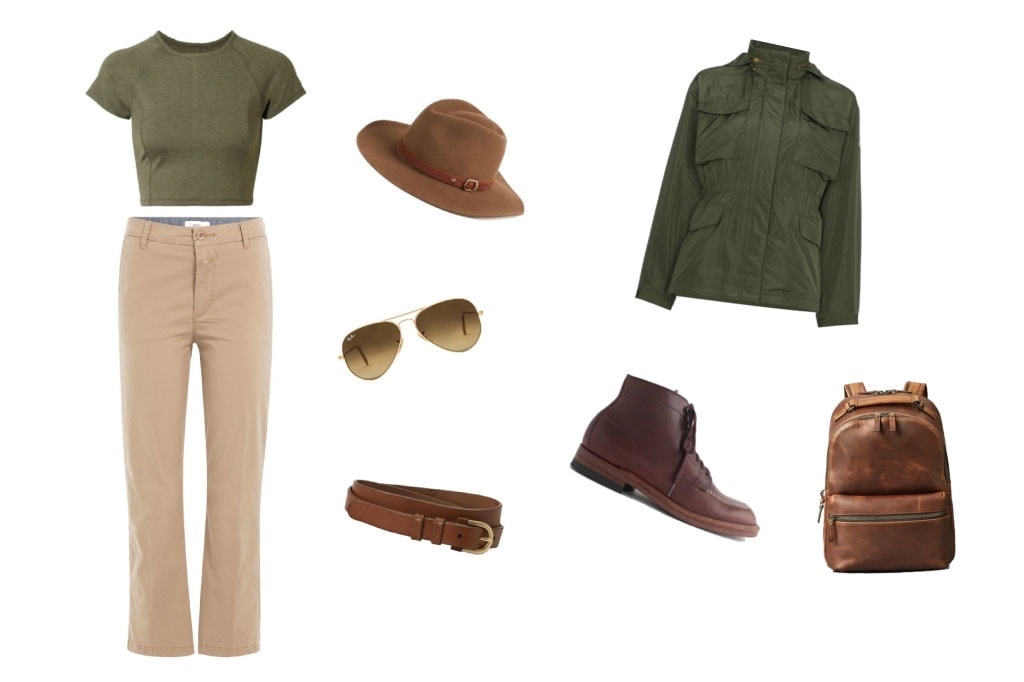 There are a lot of options as far as photography equipment goes, but the one thing you will definitely want when packing for safari is a camera with a good zoom lens. Your two best options are a DSLR with a lens of at least 200mm or a Superzoom, or bridge camera. I brought a Canon EOS Rebel T6 with me. All my photos are either taken with that or my iPhone. I brought two lenses for my Canon, an 18-55mm and a 75-300mm.

Most of the time, I was too lazy or didn’t have enough time to change lenses between shots, so most of my wildlife photos were taken on my Canon and landscapes with my iPhone. I found that the 75-300mm was just long enough. There were a handful of times that an even longer lens would have been great though. For the most part, my Canon served its purpose and I got some great shots.

I did a lot of research on cameras before I left, and I almost decided to go with the Panasonic Lumix DMC-FZ100. It’s a Superzoom camera. Its lens range is equivalent to a 25-600mm lens on a DSLR. Based on my recommendation, my friend decided to rent this camera for our trip and I can’t say enough good things about it. She was able to quickly zoom in and out, didn’t have to fumble with different lenses, and got some amazing photos, as well as video.

It’s can be used as a  point-and-shoot but has great zoom capabilities and the photo quality rivals that of a DSLR. It’s a great camera that requires minimal effort and photography knowledge! Click to purchase the Canon EOS Rebel T6 or Panasonic Lumix DMC-FZ1000. I would recommend bringing an extra memory card and battery, no matter your camera choice. I also brought a small portable tripod for my iPhone. This is great for taking photos of yo