The 8 Best Things to Do in Chiang Mai

Chiang Mai is the second-largest city in Thailand and is commonly used as a base for tourists exploring the northern part of the country. Chiang Mai has been popular with backpackers for years due to its affordability and has become increasingly popular with ex-pats and nomads in recent years. It’s relatively inexpensive and the dollar can go far, making it the perfect place to spend either a few days or an extended period of time.

Chiang Mai is an easy-to-explore city and has so much to offer. It is the cultural center of Thailand and within its ancient walls, you’ll find beautiful temples, bustling markets, friendly locals, and delicious food. Just outside of the city is something much different- a beautiful jungle landscape surrounded by mountains. It’s no surprise that Chiang Mai is one of Thailand’s most popular tourist destinations. Continue reading to discover the best things to do in Chiang Mai, Thailand:

Best Things to Do in Chiang Mai

Elephant Nature Park is one of the top things to do in Chiang Mai. It’s is one of the few true elephant rescue and rehabilitation centers in Thailand. The park provides a beautiful environment, not only for elephants but for dogs, cats, water buffaloes, and other animals. Visitors can choose to spend a day at the park or volunteer for a longer period of time.

I chose to participate in a short park visit. The short park visit includes a tour of the grounds, feeding and observing the elephants, and a vegetarian lunch. Elephant Nature Park does not offer elephant rides and no legitimate sanctuary will. An elephant’s back is not built for riding and it is actually extremely painful for them. Elephant Nature Park offers some wonderful off-site activities as well.  I participated in the full-day Elephant Highlands activity, which is part of the Saddle-Off program.

The Saddle-Off program was created to improve the lives of elephants at independent camps. Elephant Nature Park works with these once unethical camps to develop a new business model- one that treats the elephants with respect. The Elephants Highlands activity is incredible. I was able to feed and walk with the elephants through a beautiful, remote area of Chiang Mai. To learn more about Elephant Nature Park, please continue to my post, “Elephant Nature Park: Visiting an Ethical Ethical Sanctuary“.

2. Shop at the Night Markets

The city of Chiang Mai has two amazing night markets called the Saturday and Sunday Walking Streets. On Saturday and Sunday nights the roads close to traffic around 4 pm and are accessible only to pedestrians until about midnight. The Saturday night market is just outside of the Old City walls and is located just beyond the south gate. Sunday Walking Street is located within the Old City. It begins at the Tha Pae Gate and runs all along Ratchadamnoen Rd.

Shopping at the markets is a must. They are the perfect place to find souvenirs and lots of great deals are available, although some vendors are more willing to bargain than others. You can expect to find beautiful crafts, inexpensive clothing, live music, and lots of street food. The Sunday night market is larger in size, but I found Saturday to be more enjoyable. The crowds were fewer and I found it had more one-of-a-kind hand-made items.

Chiang Rai is located about three hours north of Chiang Mai and although it is a long day trip, it is definitely doable. I highly recommend making the trip to visit both Wat Rong Khun and Wat Rong Sear Tean, also known as the White and Blue Temples. They’re much more modern than those found in Chiang Mai and are stunningly beautiful. The White Temple is the creation of visual artist, Chalermchai Kositpipat.

The temple has been a work in progress since 1998 and the main temple is set to be completed this year (2020). The other surrounding structures will likely take decades and will not be completed in the artists’ lifetime. The temple’s indoor murals tell a story of the Buddha’s life and his teachings through the use of pop culture and recent events. You may spot Michael Jackson, Freddy Kruger, and scenes depicting 9/11 painted on the walls.

Wat Rong Sear Tean, or the Blue Temple, is just a short drive from Wat Rong Khun and is another very modern temple. An ancient temple sat abandoned at the site for almost 100 years until villagers decided to build a new one in 1996. Construction commenced in 2005 and the main hall was completed in 2016. The surrounding structures continue to be a work in progress.

Both the outside and inside are a vivid blue with beautiful gold embellishments. Inside, a large, white, seated Buddha is surrounded by tall columns and intricate artwork. The artwork on the walls may look familiar. The artist, Phuttha Kabkaew, was once a student of Chalermchai Kositpipat, the man behind the White Temple. Unlike the White Temple, though, visitors are allowed to photograph the interior. 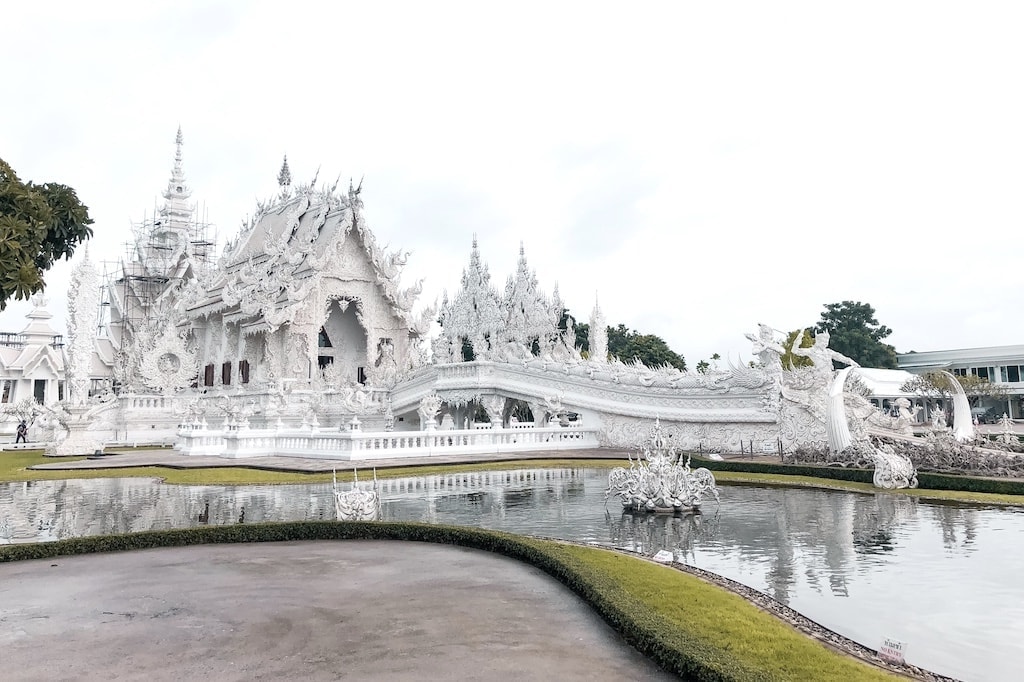 There are many incredible temples within the Old City walls of Chiang Mai. I recommend exploring the area on foot. The temples are hard to miss and located fairly close to one another. Must-see temples include Wat Chedi Luang, Wat Phra Singh, and Wat Sri Suphan. Wat Chedi Luang is one of Chiang Mai’s tallest and most important temples.

It’s known for once housing Thailand’s famous Emerald Buddha before the statue was moved to Bangkok. The massive brick chedi was built in the 14th century and later destroyed by an earthquake in 1545. In the 1990s the temple was partially restored but the top was never reconstructed since it’s not known what it originally looked like.

Wat Phra Singh is one of the most visited temples in Chiang Mai. It was built in 1345 and renovated in the early 19th century. It was built in the traditional Lanna style, a style characterized by multi-tiered roofs, small windows and doors, and beautiful carpentry.

Wat Sri Suphan, also known as the Silver Temple, is a small but unique temple. It too was built in the traditional Lanna style. Its original construction was completed in 1502 and it served as a temple for a silversmith village. Renovations began in 2008 and it was at this time that the temple was rebuilt entirely from silver and aluminum. The detailed silver work is incredible and it is especially beautiful when it’s lit up at night.