Top Things to Do in Luang Prabang, Laos

Luang Prabang, a city located in northern Laos, is a small but beautiful city. It was once the royal capital of the country and is now a protected UNESCO World Heritage site. It is full of French influence and is somewhat reminiscent of a European town, but with one large difference, it’s surrounded by jungle. For such a small city, Luang Prabang has plenty to do. There are temples, caves, and waterfalls to explore and the food is pretty amazing as well. Here are the top things to do in Luang Prabang, Laos:

Kuang Si Falls is located about 45 minutes south of Luang Prabang and is the largest waterfall in the area. It consists of multiple tiers and its 164 ft (50 m) drop can be found at the end of a short fifteen-minute hike. Depending on water levels, you can continue onward. There’s a path located on the side of the falls that leads to a viewpoint and a secret pool for swimming.

Unfortunately, there was too much water when I visited and the path was closed. This was one of the downfalls of visiting during the wet season. The area had recently received a large amount of rain and the falls were too powerful for any swimming. In addition, the usually blue water was brown due to the heavy rains.

There are tours that you can join in town that will take you to Kuang Si, but I decided to grab a taxi and leave early in the morning. It was worth the extra cost to me to be able to enjoy the area without crowds of people. It was incredibly peaceful and beautiful, even with the raging waters of the wet season. Make sure you bring cash for the entrance fee of $2.50 USD.

One of Luang Prabang’s major landmarks is Mount Phou Si, a 328 ft (100 m) high hill that sits in the middle of the city. It offers gorgeous 360° views of the city and is well worth the steep climb up its many steps. There are two sides of Mount Phou Si and you can access the hill through either side.

I would recommend using one to go up and the other to come down. The path beginning at Sisavongvang Road is a total of 328 steps and there isn’t a whole lot to see on this route. It is pretty much a direct climb to the top. The second way up is located at Thanon Phousi, next to the Nam Khan River, and is 355 steps. This path has a few viewpoints along the way and the temple, Wat Tham Phou Si can be found about halfway up the hill.

At the top, you’ll find another temple, Wat Chom Si, as well as places to relax and take in the views. On one side, you will see the Mekong River, and on the other side, the Nam Khan River. I would give yourself a couple of hours for the climb and to explore the temples. I would also try to time it so you can enjoy the sunset from the top.

The Pak Ou Caves, located about an hour north of Luang Prabang, are sacred caves found within a limestone hillside. The caves are filled with thousands of Buddha statues that people have brought over hundreds of years. There are two caves to visit, Tham Ting and Tham Theung. Tham Ting is an upper cave that sits about 50m above the river.

The cave is quite dark and you will need a flashlight. They are available to rent for a small fee at the cave entrance. Tham Theung sits right on the Mekong River and is the more impressive of the two. It contains more than 2500 Buddha statues. The Pak Ou Caves can only be reached by boat. You have the option of visiting via tour or on your own. Tours leave each morning and boat down the river to the caves.

I had such a short amount of time in Luang Prabang, my only option was to hire a taxi to take me to a ferry, which I then took across the river to the cave entrance. This was easy to do, but the drive included some fairly remote, dirt roads that resulted in a long and incredibly bumpy ride. I would opt to go with a tour that takes you the whole distance by boat. I imagine it’s much more enjoyable and it takes about the same amount of time. The caves are just like any temple, so make sure you dress respectfully and bring something to cover your shoulders.

4. Shop the Markets and Boutiques

Luang Prabang has both a morning and night market. The morning market is more for the locals, whereas the night market is geared more toward tourists. The morning market can be found off of Sisavangvong Road and in the streets surrounding Wat Mai. Vendors begin setting up before sunrise and it is busy by 7 am. All kinds of food items can be found here, including but definitely not limited, to fresh local fruits and vegetables, dried frogs and insects, and other exotic ingredients from the jungle. The morning market isn’t for everyone, though, and being an animal lover, it was difficult for me to see all the animals stuffed into tiny cages for sale.

The night market can be found every night on Sisavangvong Road. It begins at dusk and lasts until about 10 pm. The street is closed down to vehicles and vendors set up on both sides of the road. You will find crafts, clothing, souvenirs, food, and more. I highly recommend trying the coconut pancakes! There are also various shops and boutiques mixed in among the many restaurants and cafes. You’ll find crafts, handmade clothing, linens, and jewelry. Stop by Queen Design Lao for some especially beautiful clothing and jewelry. 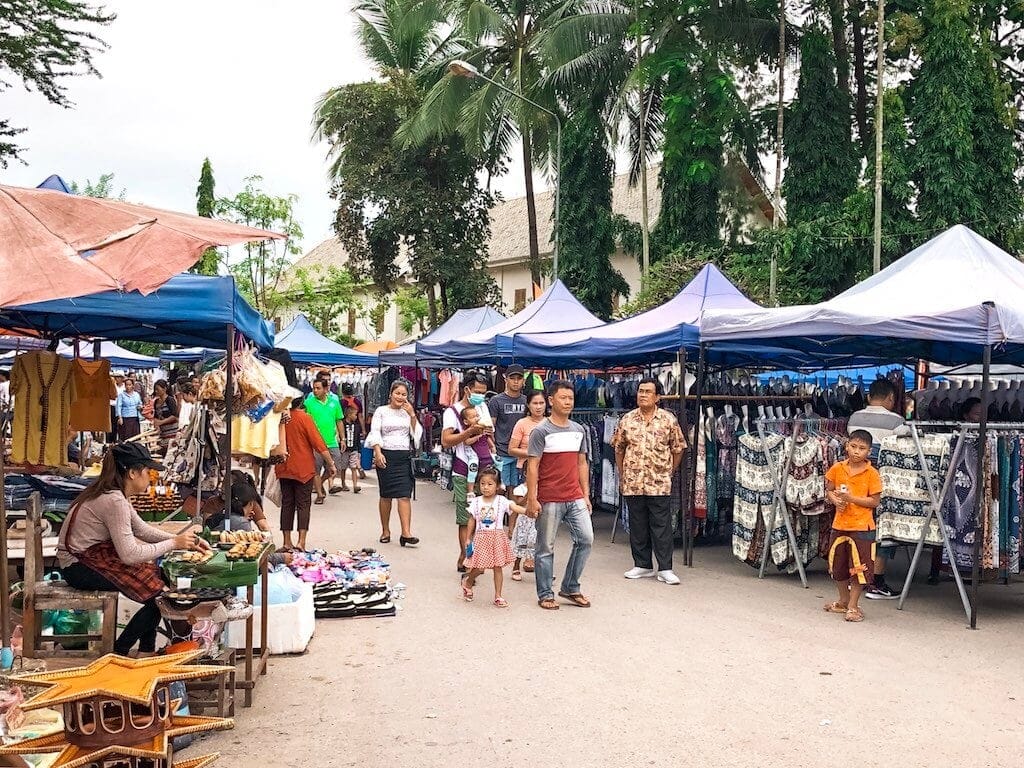 The Royal Palace was built for King Sisabong Ving in 1904 and after his death, was later occupied by the Crown Prince Savang Vatthanna. The family of the Crown Prince was the last to occupy the grounds. In 1975, the monarchy was overthrown by communists and the palace was eventually converted into a national museum that opened to the public in 1995.

The architecture of the Royal Palace is a mix of both traditional Lao and French colonial and the interior is full of elegant furnishings. The museum is surrounded by beautifully landscaped grounds that you can walk around and explore. Don’t miss the small collection of cars housed in a building next to the palace. Many of them were gifted to the royal family from the United States, which I found interesting.