How to Stay at the Incredible Giraffe Manor in Kenya

Giraffe Manor, a small boutique hotel in Kenya, may very well be the most Instagrammed property in the world. Its popularity skyrocketed in recent years and in addition to being one of the most photographed properties, it has also become one of the most sought-after. Reservations have become difficult to secure and must be made a year in advance. The Manor became famous for its resident herd of Rothschild giraffes and specifically for its breakfast (more on that later).

I was lucky enough to visit The Manor a couple of years ago and it was a once-in-a-lifetime experience that I will not soon forget. Lately, I’ve been seeing a lot of questions regarding the incredible giraffe hotel, including, “How much does it cost?”, “Is it worth it?”, and “How can I book a stay?”. Continue reading to find out everything you need to know about visiting Giraffe Manor in Kenya:

What Is Giraffe Manor?


Giraffe Manor is an exclusive boutique hotel in Nairobi, Kenya. It’s located in Langata, a residential suburb, and is close to Nairobi International Airport and the capital’s bustling city center. Giraffe Manor is a beautiful brick and ivy-covered house that was modeled after a Scottish hunting lodge. It was built in the early 1930s and later converted to a hotel in the 1980s. The property remains authentic to the time it was built and takes you back to a period when Europeans first flocked to East Africa for safari.

Giraffe Manor is one of Nairobi’s most iconic buildings. It features twelve bedrooms (six in the original house and six in the garden manor), meticulously landscaped gardens, sunny terraces, and incredible decor. You’ll find elegant canopy beds, oversized fireplaces, and stunning artwork within its interior.

The hotel is currently owned by The Safari Collection, which owns a handful of other hotels and lodges in the area. The Manor sits on 12 acres of private land and is surrounded by 140 acres of indigenous forest. Oh, and did I mention it’s home to a herd of giraffes?

Giraffe Manor was built in 1932 by Sir David Duncan of the Mackintosh family, famous for Mackintosh Toffee. He sold the property in the 1960s and the new owner repeatedly leased the property until it fell into a point of disrepair. In 1974, The Manor was purchased by conservationist, Betty Leslie-Melville and her husband Jock Melville.

Shortly after purchasing the property, the Leslie-Melvilles learned that the only remaining Rothschild giraffes in Kenya were in danger due to loss of habitat. The giraffes’ sole habitat in Kenya was an 18,000 acre (73 km2) privately owned ranch. The Kenyan government had recently purchased the land and had plans to sub-divide it and slaughter its giraffes.

The Manor was already home to three wild bull giraffes, so Betty and Jock agreed to re-home one of the giraffes. The giraffe was an 8-foot-tall (2.4 m) baby that the couple named Daisy. Daisy was soon joined by another baby giraffe, named Marlon and the Leslie-Melvilles began working on a breeding program to reintroduce the Rothschild giraffe into the wild and help expand the population.

In 1972, they donated land to The African Fund for Endangered Wildlife, a charitable organization that they formed with their daughter, Betty, and built the Giraffe Center on it. The Giraffe Center is now a place where Kenyan school children could learn about conservation and ecology.

In 1983, Betty’s son moved into The Manor and took over as manager for the small hotel. Guests were allowed to feed the giraffes from their bedroom windows and were even joined by the giraffes for breakfast. This was the beginning of the Giraffe Manor that we know today. The hotel is currently owned by Mikey and Tanya Carr and is part of The Safari Collection, a group of incredible lodges and hotels in the area. 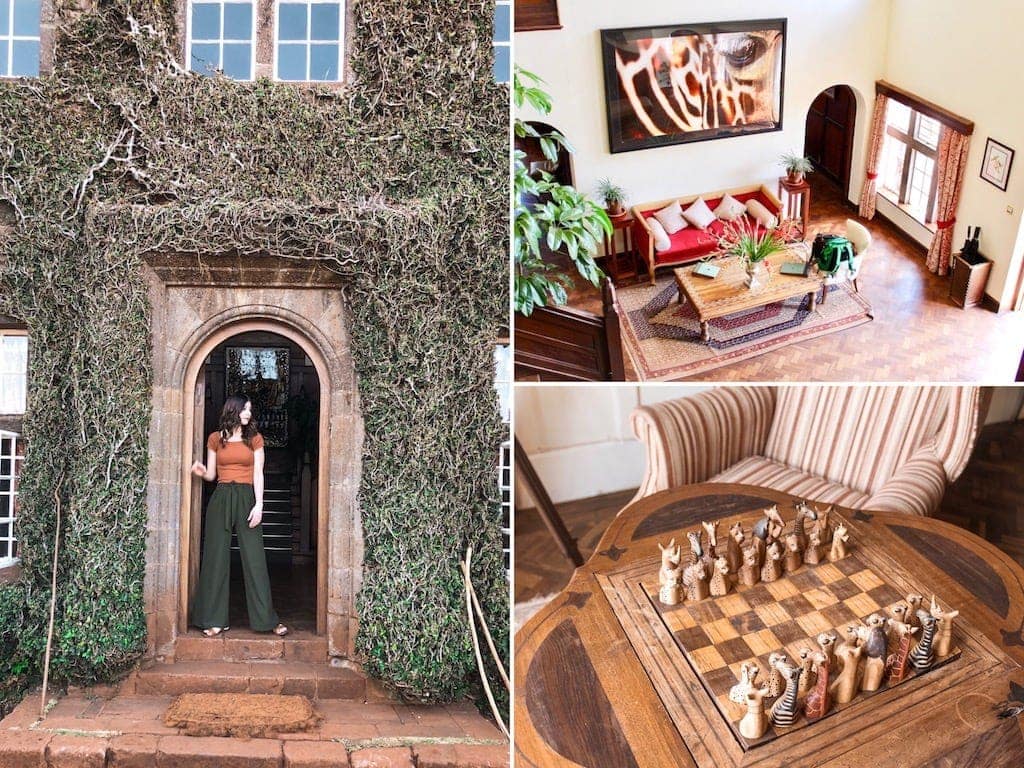 In short, yes, Giraffe Manor is ethical. I tend to avoid interaction with captive animals unless I have done extensive research and have found it to be a true sanctuary-type situation. The main purpose of the giraffes is not to entertain guests. The Manor’s Giraffe Center is just a short walk from the main house. It’s a sanctuary and breeding center for the Rothschild Giraffe, the most endangered species of giraffe. Thus far, they have bred and released over 40 giraffes into parks across Kenya.

Conservation and education are of the utmost importance at the Giraffe Center. It hosts thousands of Kenyan school children each year in hopes of using education to change mindsets and in turn, positively impact the future of these animals. The school children are allowed to get up close to the giraffes and really make a connection with them. There is absolutely no forced interaction between guests and the giraffes at either the Giraffe Center or Giraffe Manor.

The giraffes roam freely between the house and the Giraffe Center. They do as they please and interaction with them is never guaranteed. Although, they do tend to go wherever the food is. The giraffes have a large amount of property to wander; however, they are not wild. They will most certainly snack on trees but are still dependent on the center for food. Hotel guests are allowed to feed “treats” if a giraffe approaches.

How Do I Book a Room?

Securing a reservation at Giraffe Manor has become somewhat of a challenge since I originally wrote this post in 2018. The following information has been updated to the best of my knowledge. There are a couple of ways to book a room at Giraffe Manor. If you are considering a stay, I would start by visiting their website and checking availability here. The best way to secure a reservation is by booking far in advance and being flexible with your dates.

The hotel books up about 12-18 months in advance. If you have a specific date in mind, I would recommend making a reservation about two years in advance. Cancellations do happen, so if you don’t see the date you desire then keep checking back. If your preferred date is available, you will want to call the hotel at your earliest convenience.

Online bookings are not currently available. Bookings may be made via email but I would advise against it. The reservation agents are great and correspondence is prompt but the drastic time difference causes a delay in communications. Your selected dates could quickly disappear while awaiting a reply.

Giraffe Manor has two separate sets of accommodations. There is the original Main Manor House and the more recently built, Garden Manor. There are six rooms in each (two suites and four superior rooms). The Garden Manor was constructed in 1999 and is a replica of the original house; although, its interior is a tad more modern.

The giraffes visit both buildings and guests staying in the Garden Manor will visit the Main Manor House for breakfast with the giraffes. The Garden Manor is exclusively for guests that will be staying in a combination of the Safari Collection’s properties and availability is easier to come by. This might be a great option for you if you are interested in going on a safari in Kenya. The Safari Collection has some beautiful lodges.