Angkor Wat is often referred to as the “Eighth Wonder” and is the primary reason why millions of tourists visit Cambodia each year. However, it is only one of the many temples that make up the Angkor Archaeological Park. Many travelers underestimate the size of Angkor. Angkor Archaeological Park is 400 square kilometers, making it the largest religious monument in the world. The park contains 72 major temples and numerous smaller ones, many of which are encompassed by jungle and not accessible to the public. Angkor was constructed in the early 12th century and was the ancient capital of the Khmer Empire that ruled much of Southeast Asia at the time.

At its peak, Angkor was one of the world’s most populous cities with an estimated 750,000 residents. It was eventually abandoned and wasn’t rediscovered until the 1840s. Tourism was unregulated for quite some time and looting of the temples was rampant. Parts of the ancient statues were removed and sold to private collectors. The park was listed as a UNESCO World Heritage Site in 1992 and restoration has since been ongoing. The most popular temples are Angkor Wat, Ta Phrom, and Bayon but many of the lesser-known temples are just as beautiful. Continue reading to discover the top temples in Siem Reap.

How to get to Siem Reap

Siem Reap is located in northwestern Cambodia and is the gateway to Angkor Archaeological Park. Siem Reap International Airport is about 7 km (4 mi) outside of town. There are no direct flights to the west, so you will need to fly into one of Asia’s major cities first. Most travelers come from Bangkok, Phnom Penh, or Ho Chi Minh City.

There are a handful of airlines available, but I found Vietnam Airlines and Cambodia Angkor Air to be affordable and have quite a few routes. Citizens of most countries can get a VISA on arrival but make sure to check in advance. Another way of reaching Siem Reap from Phnom Penh is by bus. Busses are inexpensive and leave daily. The journey takes about six hours.

When to Visit Siem Reap

Siem Reap can be visited year-round but there are months that are better than others. Siem Reap is usually the driest between the months of November to March. December and January are the coolest months but are also the most crowded at the Angkor temples. This is considered the high season and everything will be a bit more costly during this time. April and May are the hottest months in Siem Reap. Visiting is still possible at this time, but activities should be planned for morning hours.

What to Wear at the Angkor Temples

Angkor Archeological Park does have a dress code. The temples require that you wear clothes that cover your shoulders and knees. You’ll also want to bring a hat and wear comfortable walking shoes. The sun can get really hot, so lightweight, breathable clothing is recommended. You may want an umbrella or rain poncho if visiting during the wet season. 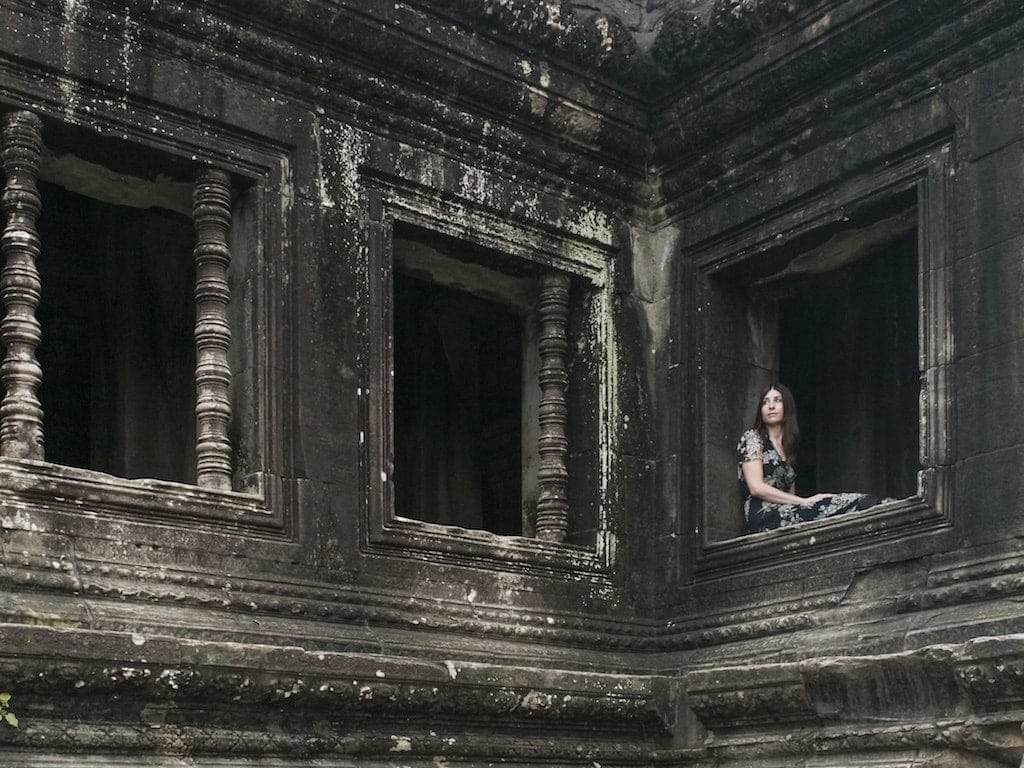 Angkor Wat is the heart of Cambodia and is one of the largest and most spectacular temples in Siem Reap. It is also one of the better preserved in the area. It was built as a Hindu temple by King Suryavarman II in the early 12th century and its construction took approximately thirty years to complete. The sandstone blocks were brought from Phnom Kulen, a holy mountain located over 50 km away, and were floated down the river on rafts.

According to inscriptions on the temple walls, it took roughly 300,000 workers and 6,000 elephants to construct it. Angkor Wat likely served as both a temple and mausoleum. The temple faces west, a direction symbolically associated with death. The intricate bas-relief carvings upon the temple walls tell a story if viewed in a counter-clockwise direction, a practice that was used in ancient Hindu funerary rites.

I highly recommend starting your day at Angkor Wat. It’s an incredible place to experience the sunrise. Arrive at the ticket office as soon as it opens and then head to the temple to secure a good view and set up your camera. I left my hotel in town at 4:30 am and it worked out perfectly. The beautiful photos that you’ll capture are definitely worth the early start.

Ta Prohm is another popular temple in Siem Reap. It became known as the “Tomb Raider Temple”, after appearing in the Angelina Jolie movie. A visit to Ta Prohm is a magical experience. It dates back to the late 12th and early 13th centuries. After the fall of the Khmer empire in the 15th century, it was abandoned and left to the jungle for hundreds of years. During this time, it was swallowed up by trees and their enormous roots.

The temple’s towers and corridors are overgrown with vegetation that has caused its walls to crumble and made them difficult to restore. This is a large part of what makes Ta Prohm so special. The moss-covered stones and the trees that push their way through the structures are beautiful. However, some of the corridors are so badly damaged that areas have been deemed unsafe and roped off to the public. I would suggest visiting Ta Prohm early in the morning. I arrived at opening and there were only a handful of people there.

Banteay Kdei, meaning “A Citadel of Chambers”, is located southeast of Ta Phrom. It’s constructed in a similar style but is much smaller and less complex. The temple is made up of four walls and has four separate entrances. Banteay Kdei was built from soft sandstone and is in some of the worst condition of all the temples.

It’s a Buddhist temple but many of the Buddha carvings on its walls have been defaced. I found that its lack of restoration makes it an interesting temple to visit. It’s also one of the lesser-visited temples and is a great place to escape the crowds between visits to the larger temples. 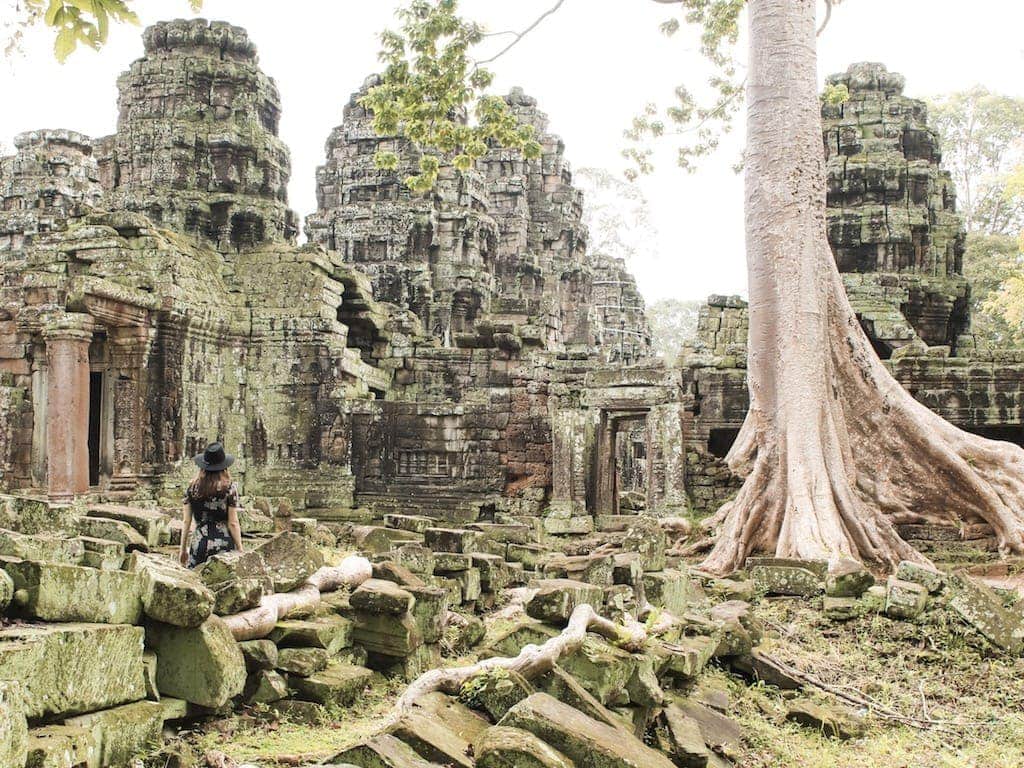 Pre Rup is a Hindu temple dedicated to Shiva. It was built in the latter half of the 10th century and constructed of brick, laterite, and san