Top Things to Do in Hanoi, Vietnam

Hanoi is Vietnam’s capital and the country’s second-largest city. It has a population of over 7 million and is both the commercial and cultural hub of northern Vietnam. The first thing you will likely notice upon arrival in Hanoi is the chaotic traffic. It can be somewhat overwhelming for a first-time visitor. The streets are overrun with scooters and honking vehicles. However, the city is actually quite easy to explore on foot and is divided into two main districts: Old Quarter and French Quarter.

Invasions by China, France, and the United States left their mark on Hanoi over the years and an interesting mix of both Eastern and Western influences can be seen throughout the city. Hanoi has a lot to offer visitors. It’s full of history, traditional entertainment, great food, and amazing architecture. The following are some of the top things to do in Hanoi, Vietnam:

Get Lost in Hanoi’s Old Quarter

The Old Quarter is the name given to the historic area of Hanoi. It’s located near Hoan Kiem Lake and is also sometimes called the Hoan Kiem District. The Old Quarter dates back to the 11th century and many of its buildings have deteriorated over the years. Its grit, though, is what gives the area its charm. Today, the Old Quarter is Hanoi’s main tourist destination but at one time, it was the manufacturing and commercial center of the city. Craftsman set up narrow storefronts and each street of shops specialized in a specific trade. The streets were then named after the good or service that they offered. There were once thirty-six of these streets but only a handful remain today. They are Ta Hien, a street of sidewalk cafes; Hang Gai, a street of silk and clothing; and Hang Duong, a street of sugar and sweets. The Old Quarter has many fun things to see and do, including historic sights, great shopping, cafes, and entertainment. I suggest taking advantage of Hanoi’s free walking tour and then allowing yourself to get lost in its many streets.

Hoan Kiem Lake can be found in the middle of historic Hanoi. It serves as a focal point and gives the otherwise busy city a sense of calm. It’s a social place where locals gather and is a great spot to relax or hang out with friends. Ngoc Son Temple is a pagoda that sits on a tiny island in the lake. It was built in 1841 and is Hanoi’s most visited temple. Ngoc Son Temple can only be accessed by a bridge and after walking through the Three-Passage Gate, a series of three gates. The first gate is beautifully detailed with Chinese lettering on each side, meaning happiness and prosperity. The second gate has symbols of Taoism, which include a tiger and dragon and the third has a large stone symbolizing a legendary inkstone. It’s free to go on the bridge but a ticket is required to go inside the temple. If you wish to go inside, make sure to wear clothing that is temple appropriate (cover your shoulders) or you will be denied entry. A ticket can be purchased at a booth directly next to the temple and costs is 30,000 VND.

Coffee culture is huge in Hanoi and the city is particularly crazy for its egg coffee. The unique and must-try coffee can found on almost any street corner but Café Giang in the Old Quarter is the home of the original. Nguyen Giang founded the cafe in 1946. He invented egg coffee at the time when fresh milk was hard to come by and coffee was being served with condensed milk (it still is today in Vietnam). Nguyen experimented by substituting a whisked egg yolk and eventually perfected its consistency. The coffee became increasingly popular and began to boom in the 1980s. Egg coffee may sound odd, but it’s actually really tasty. It doesn’t taste egg-like, despite its name, and is frothy and sweet. There are now numerous cafes in the area serving their own version of egg coffee but none quite as good as Cafe Giang. Cafe Giang can be somewhat difficult to find for a first-time visitor. I walked right by it and had to double back. It’s hidden in what looks like an alleyway and located up a flight of stairs. Don’t let the more obvious, copy-cat cafe on the same block fool you.

Enjoy the Old Quarter’s Many Cafes

If you’re looking for a place to escape the chaos of Hanoi’s busy streets, then I suggest visiting one of the city’s many cafes. One option is Cafe Pho Co or the Old Town Garden Cafe as its called in English. Cafe Pho Co is located just north of the lake on Hang Gai street. It’s a hidden rooftop cafe and is accessed through the back of a clothing shop; however, I was able to find it fairly easily with the use of google maps. They offer pastries, coffee, smoothies, and a great view. Chirping birds and a rooster greet you upon entering and the staff will direct you to the way of the stairs. It’s a great place to take a mid-day break. The Note Cafe is another cute cafe and a favorite among tourists. The three-story cafe is located right next to Hoan Kiem Lake and has a great lake view. Instead of wallpaper, the cafe is covered in post-it notes. The notes are in many different languages and are written by visitors from all over the world.

Walking Street is a pedestrian-only area around Hoan Kiem Lake. The street is closed to traffic beginning on Friday at 6 p.m until Sunday at 12 p.m. It’s a great place for both locals and tourists. There are designated play areas for kids and vendors selling clothing, crafts, souvenirs, and more. Walking Street is a great place to relax and take in Vietnamese culture. I suggest getting an ice cream from one of the shops along the road and spending some time people-watching at the lake.

The Hanoi Night Market takes place every Friday, Saturday, and Sunday Night. It starts around 7 pm and goes until late. The street is bustling with people and is crammed with roadside stalls and food vendors. It’s a great place to sample some street food or test your bargaining skills with some shopping.  The market starts at Dong Kinh Nghia Thuc Square and occupies Hang Duong, Hang Ngang, and Hang Dao streets.

A water puppet show is exactly what it sounds like. Puppeteers are hidden behind a screen and use bamboo rods to control the puppets and make them appear to be moving over a shallow pool of water. It’s an ancient tradition dating back to the 11th century and the practice requires great skill. The show is choreographed to music provided by a traditional Vietnamese orchestra and each song tells a story that is acted out by the puppets. There are two different water puppet theaters, both located in the Old Quarter, but I recommend the world-famous, Thang Long Theatre. The performances at Thang Long Theatre do sell out so I recommend purchasing a ticket in advance here. Tickets can also be purchased at the theater box office. The performance is an hour long and a ticket from the box office costs 100,000 VND. The show may seem quite touristic, but I found it to be a special experience and thoroughly enjoyed it. 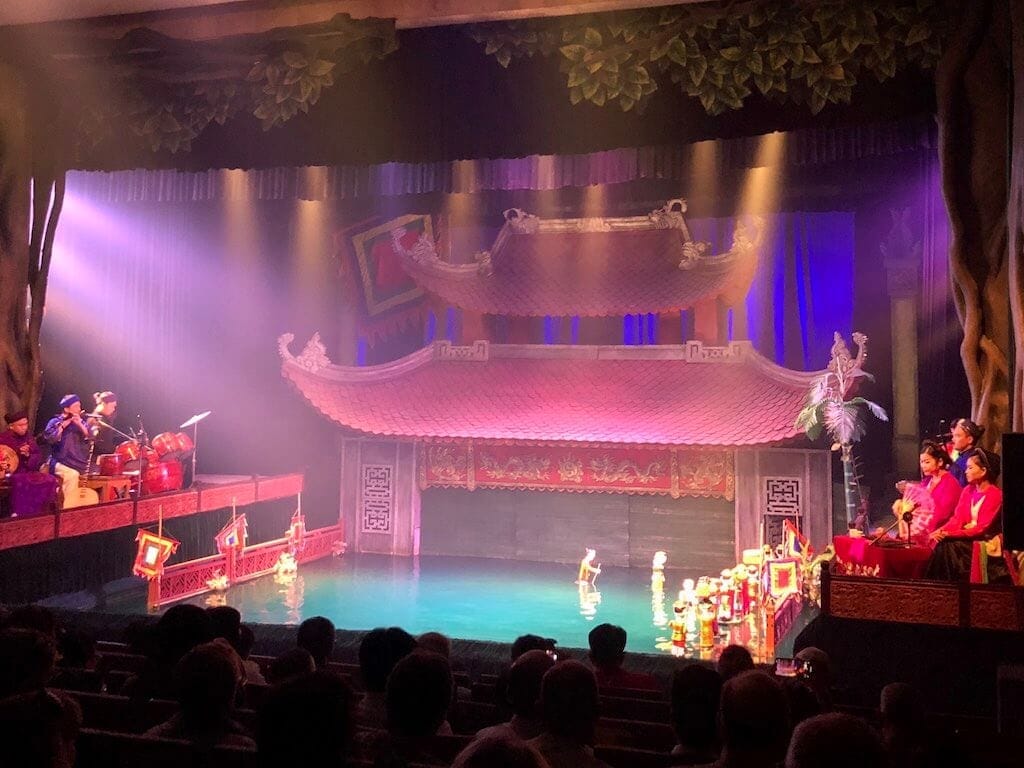 Hanoi’s French Quarter may not be as bustling as its Old Quarter but is worth a visit nonetheless. In the late 19th century, while under French occupation, many of Hanoi’s Vietnamese buildings were destroyed and replaced with ritzy French-style villas. The area, located near the southeastern end of Hoan Kiem Lake, is home to Hanoi’s more affluent. Its main road, Trang Tien is a busy shopping area with high-end shopping malls and boutiques. Luxury hotels, such as the Sofitel Legend Metropole Hanoi, can also be found in the French Quarter. The Sofitel Legend Metropole Hanoi originally opened in 1901 and has hosted many celebrities and powerful figures over the years. The hotel is housed in a gorgeous French colonial building and is located just a block away from the famous Hanoi Opera House. Other attractions in the French Quarter include the Cathedral of Hanoi, the National Museum of Vietnamese History, and Hoa La Prison.